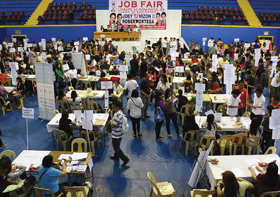 CONTRARY to popular belief, a study released by the government’s Philippine Institute for Development Studies (PIDS) showed that unemployment was an issue of the middle class and not of the poor.
In a Policy Note titled “Is Growth Really Jobless?,” PIDS Senior Research Fellow Jose Ramon G. Albert said that unlike the middle class, the poor have no choice but to look for whatever job comes their way, even if it means going into informal jobs, to get by.
The middle class, Albert said, may be unemployed by choice or can afford the luxury of time to wait for better opportunities to come their way.
“Unemployment is more of a middle-class issue. Many of the poor are not unemployed because they cannot afford not to engage in economic activities. The majority of the unemployed in 2012 [81 percent] are not poor,” Albert said.
“They may be unemployed by choice or they may just be choosy in finding jobs. The PSA [Philippine Statistics Authority] also suggests that among the self-employed and unpaid family workers [engaged in vulnerable employment], poverty incidence is estimated at 29 percent in 2012,” Albert said.
Albert cited data from the PSA that showed that the educational attainments of the unemployed between 1998 and 2012 are higher.
Further, in the April 2014 Labor Force Survey results of the PSA, around 36.9 percent of the unemployed are college graduates and undergraduates.
This is composed of 22.4 percent, or one-fifth, of the labor force who are unemployed are college graduates, while 14.5 percent were college undergraduates.
“The educational attainments of the unemployed are quite high, confirming that unemployment is not an issue with the poor. However, the unemployed poor have similar characteristics as the underemployed poor,” Albert said.
This means, Albert said, that the government’s bigger challenge is to address underemployment. This group of workers are those who are employed persons wanting additional hours of work in their present job or desire to have additional jobs or a new job that requires longer working hours.
Data from the PSA showed that in April, around 7 million Filipinos are unemployed, representing 18.2 percent of the entire labor force.
The desire to look for additional income sources is common for those who are in the informal sector or are engaged in vulnerable employment.
“Some of the currently unemployed and underemployed segments of society will eventually try to find jobs overseas or in the unorganized [or informal] sector, or create their own jobs. The government will need to assist them in one way or another, within its limited resources, but it will need effective partnership,” Albert said.
He also urged private-sector companies to invest further by increasing their hiring of permanent personnel rather than temporary or contractual workers.
Albert said this is a means to increase the private sector’s long-term investment in the Philippines.
“Our taipans should practice employment policies that favor the hiring of more permanent workers rather than temporary ones who will work for five or six months only. Wealthy businessmen should put their money into long-term productive investments,” Albert said.
Companies in the Philippines were allowed to hire employees through contractualization through the Herrera law, or the 1989 Labor Code amendments. The law was proposed by former Sen. Ernesto Herrera, the former head of the Trade Union Congress of the Philippines.
The amendment allows “labor-only” contracting by employers who do not have substantial capital or investment in the form of tools, equipment, machineries, work premises, among others.
Workers under the ambit of a labor-only contracting agreement may perform activities directly related to the principal business of the employer under a specified period of time.
Original URL: http://businessmirror.com.ph/index.php/en/news/economy/37945-unemployment-bothers-the-middle-class-more-than-the-poor-pids