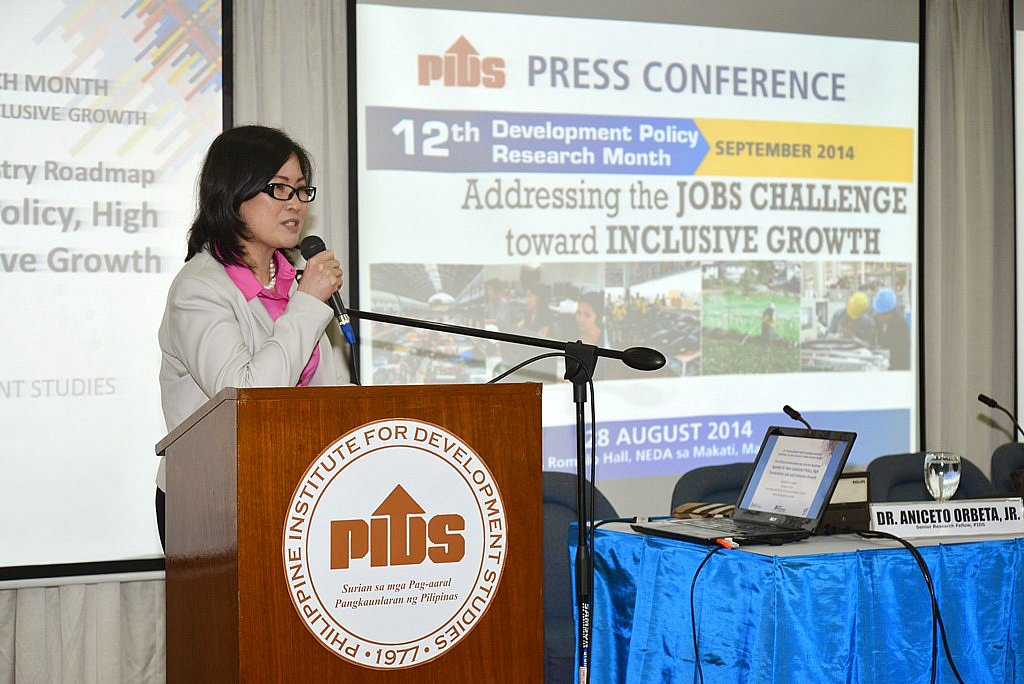 The automotive industry is expected to yield 300,000 jobs under a new industrial policy that seeks to revive the manufacturing sector, an official bared.
Reviving the manufacturing sector will help achieve inclusive growth and at the same time generate better-paying jobs, said Rafaelita Aldaba, senior research fellow at the Philippine Institute of Development Studies (PIDS) now on secondment to the Department of Trade and Industry (DTI), in a press conference launching the 12th Development Policy Research Month (DPRM) last August 28.
“We're looking at auto investments for broad-based industrial growth to happen. Auto has a large multiplier effect,” said Aldaba, who joined the DTI as assistant secretary last year. “We have an auto program and it's already being finalized.”
The economist pointed out that manufacturing had stagnated in the past two decades, leaving the country dependent on services for growth and job creation. But structural transformation of the economy is needed as services won’t be enough given the entry of 800,000 new workers to the job market annually, and the three million unemployed. “Competitiveness is crucial. We need to upgrade our manufacturing capacity,” she added.
Aldaba however clarified that the government’s role would be to ensure a conducive environment to industrial upgrading. “Firms, the private sector, need to execute the roadmaps. They will be the proximate cause of growth, investment, and entrepreneurship,” she said.
The goal of the Manufacturing Roadmap, which incorporates 20 industry development roadmaps, is to hike manufacturing value added contribution to 30 percent of gross domestic product, and a 15 percent increase in employment. “We want to move workers from informal to formal jobs, low-productivity to high-productivity jobs,” Aldaba said.
PIDS Senior Research Fellow Aniceto Orbeta called for labor policy reforms, citing empirical evidence that current policies such as the minimum wage had failed to reduce the ranks of the jobless. Orbeta presented the results of a labor policy analysis he had co-authored with Vicente Paqueo, Leonardo Lanzona, and Dean Dulay, that showed that minimum wage regulations have generally been not helpful and even “detrimental to the welfare of the common man”.
Smaller firms, for instance, are being forced to reduce hiring, and are losing out to large firms. “Minimum wages have a negative impact for smaller firms, and because smaller firms dominate, the total impact is negative,” Orbeta said. Moreover, the minimum wage hurts the employment probability of the young, female and inexperienced workers. Data also showed that it lowers the average proportion of working-age family members who will be hired.
Orbeta said there should be flexibility in hiring and firing, and that the poor and jobless should also be represented in the existing tripartite wage-setting scheme. “We are not anti-worker. What we are saying is our old tools are not working for the workers for their decent wages,” he added.
For the observance of 12th DPRM, PIDS has organized a series of fora for the whole month of September anchored on the theme “Addressing the Jobs Challenge toward Inclusive Growth”. The series of fora will gather policymakers, program planners, development researchers, and labor leaders to identify the causes of unemployment and underemployment and to seek ways on how to effectively address these.
"We are highlighting another timely issue in this year’s DPRM. Job creation is a central feature of the Aquino Administration’s strategy for inclusive growth," PIDS President Gilberto Llanto said in his remarks.
"With the Philippines in the cusp of major international and regional developments such as the forthcoming ASEAN economic integration in 2015, it is high time that we take a look at our labor policies and regulations and other binding constraints that hamper the country’s ability to generate ample and productive jobs and make use of its abundant resources. We should determine what policy measures and interventions can make a serious dent on high income inequality and poverty incidence," Llanto said.